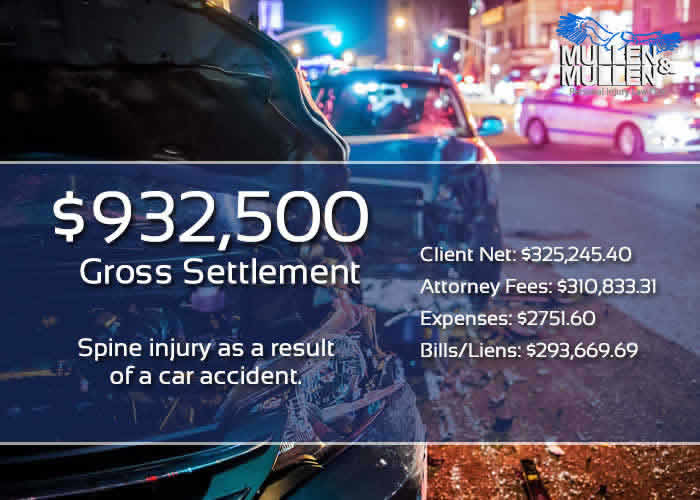 $932,500 Settlement by Attorney for Spine Injury in Dallas Car Accident

Our client was driving in the course and scope of his employment. An underinsured motorist was distracted, failed to timely apply her brakes, and rear-ended his automobile.

Our client had to be taken to the emergency room via ambulance due to immediate complaints of neck and back pain. A physical examination by the ER physician revealed lumbar tenderness. He was released home but had to return to the hospital the following day due to continued significant pain and discomfort.

Comments from Attorney Joseph Morrison: Our client was injured while on the job thus he had the option of filing a Workers’ Compensation claim. We discovered, however, that the vehicle he was operating was also covered under his employer’s large UM/UIM (uninsured/underinsured) motorist policy.

The problem with going through the Texas Workers’ Comp system is that the deck is often stacked against the injured worker. Clinics are usually employer friendly and injured victims are often rushed back to work without getting the help they need. Whether someone should utilize Workers’ Compensation in the context of a personal injury claim needs to be decided on a case-by-case basis.

For example, if multiple persons are injured in a car accident and available liability policy limits are unknown going through Workers’ Comp might be advantageous. In this particular case our client wanted to make sure he was treated by medical professionals that had his – as opposed to his employer’s – best interests at heart.

Remember: If you are injured on the job, you need to quickly determine whether your employer offers Workers’ Compensation benefits. Your employer’s status as a subscriber or non-subscriber will greatly impact your legal rights. If your employer is a subscriber you will want to visit with a personal injury lawyer in Dallas, in the event the accident was caused by a third-party, so that you can determine the best way to approach your individual case.

Our client was experiencing low back pain radiating down his left leg into his left foot. An MRI of his lumbar spine was ordered and revealed a lumbar disc herniation and annular fissure at L5-S1. He underwent several injections but the relief they provided was only temporary. He was recommended for spine surgery.

I sent several letters to the underinsured motorist carrier prior to the client’s surgery informing them we were relying on their statements that coverage existed for the loss. Documenting all communications with adjusters can be absolutely critical. Later, when the carrier postured like coverage might not be afforded, I was able to reference the prior communications and prevent them from attempting to disclaim coverage under a loophole.

We assisted the client in getting the surgery he desperately needed. The neurosurgeon, hospital, anesthesiologist, surgical assistant, and hardware provider all agreed to delay billing our client until the conclusion of his case so that he could devote 100% of his attention to recovery without the stress of bill collectors harassing him for payment.

Comments from Attorney Shane Mullen: We received policy limits from the liability carrier and almost all of the available underinsured motorist limits as well. We advised the client to accept the offers because he personally would have gained nothing from litigation. Increased attorney fees and litigation expenses would have wiped out the remaining monies under the underinsured motorist policy. We obtained this client his best possible result without the stress associated with time-consuming litigation. This was an A+ result for a very deserving client.