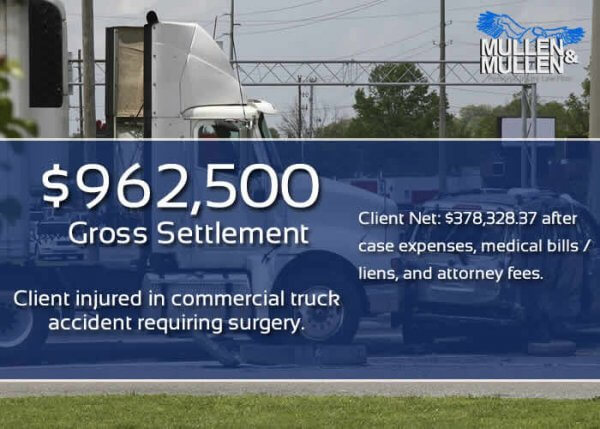 $962,500 settlement for neck injury in Dallas, TX commercial semi truck accident by attorney for client who required surgery to recover.

A client of our personal injury law firm in Dallas was a passenger in an automobile traveling west on US 287. A negligent 18 Wheeler driver wasn’t paying attention and made an unsafe lane change that caused his commercial vehicle to hit our clients automobile. She was taken to the hospital via ambulance, due in part to her medical history which included a prior major spine surgery.

Comments from Attorney Shane Mullen: I have always understood and passionately argued that someone with a pre-existing condition is more susceptible to injury when involved in a Traffic collision. In this case the client had undergone major spine surgery a few years prior to the wreck. I knew her pre-existing condition would be a real battleground.

IMPORTANT: Texas recognizes the “Eggshell Plaintiff” doctrine. A healthy 25 year-old male involved in a moderate property damage wreck might just need a few weeks of physical therapy to fully recover from his injuries. If “Mr. Glass” from the movie “Unbreakable” was involved in the exact same motor vehicle collision he would likely break multiple bones due to his pre-existing condition.

The multiple broken bones are fully compensable damages since you take the Plaintiff as you find them. Our client’s imaging studies were nearly identical to her prior studies but she was experiencing increased pain and discomfort as well as both new and increased symptomology.

Early on in this Dallas trucking accident case I stressed to the client the importance of making sure any new or increased symptoms were properly documented. The client eventually underwent laminectomies at C5-6 for decompression of the thecal sac and exiting nerve roots.

Her neurosurgeon noted that our client had bilateral foraminal stenosis made symptomatic following the truck accident. When it came time to negotiate the insurance carrier for the trucking company suggested property damage was only moderate and that the force of the impact could not have resulted in the need for surgery.

I drew the adjuster’s attention to the documented new and increased symptomology. I explained that even a moderate wreck could cause an aggravation of a pre-existing condition – especially when our client’s condition previously necessitated major spine surgery.

What am I most proud of in this case? This particular person had been previously represented by our personal injury law office. It’s always rewarding when a former client retains you again or recommends you to a friend or family member.

We are blessed to develop true relationships with the people we represent. I helped her obtain a near liability policy limits offer without the necessity of costly and time-consuming litigation. She saved over $70,000 with our reduced contingency fee rate. This was an exceptional case result for a truly deserving person that I have had the pleasure of really getting to know. I couldn’t be happier for her.