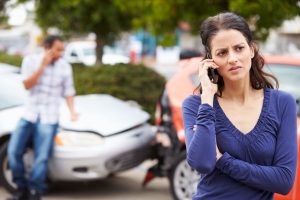 Our client was driving northbound on the Dallas North Tollway service road in Frisco, TX. He brought his vehicle to a complete stop at a red light. A distracted driver, in the course and scope of her employment, failed to slow down and rear-ended his car as the light was turning green. They exchanged insurance information in a nearby parking lot but police were not called to the scene.

Remember: Large delivery vans and 18-wheelers are not the only commercial vehicles on the road. Even a small passenger vehicle can be a covered automobile under a commercial insurance policy, if it is used in the course and scope of one’s business.

It is imperative that your car accident attorney check vehicle ownership records to ascertain if the at-fault driver’s car or truck was used for business purposes. If you are involved in a collision with a vehicle and it has any signage make sure to take photographs. Also, if the driver is wearing a uniform or has a company shirt on make note of who his or her employer appears to be.

Comments from Attorney Joseph Morrison: Insurance adjusters love to suggest that someone who had neck or back pain before an auto accident should not be entitled to any compensation whatsoever for neck and back pain following a collision. That’s entirely not true though. Texas law clearly allows injured victims to recover damages even if a wreck only aggravates a pre-existing condition.

The best approach is to acknowledge prior pain and discomfort but to focus on any increase in your pain level or any new symptoms that develop post-accident.

Our client had neck and back discomfort prior to the wreck. It was significant enough that he had undergone a lumbar MRI roughly three years before the commercial vehicle accident at issue. We requested his prior imaging study and our client presented a copy of same to his pain management physician. The doctor observed that his prior lumbar MRI did not show a herniated disc at L5-S1 whereas his lumbar MRI following the wreck clearly did.

The comparison of his pre-and-post car wreck lumbar MRI films clearly demonstrated the client’s degenerative disc disease had been aggravated. It also, however, clearly demonstrated that the lumbar herniated disc was a new and distinct injury that coincided with additional symptoms he experienced following the wreck, i.e. occasional numbness and tingling in his legs.

His radicular complaints were significantly improved following facet joint injections, median branch nerve blocks, and trigger point injections. By incorporating his prior medical records into his case, as opposed to playing “hide the ball,” we maximized his financial compensation.

The settlement for this personal injury claim involving a herniated disc as a result of a commercial auto accident in Frisco, TX was $76,000. Attorney fees were $21,280. Case expenses were $72.06. After paying medical providers, the client’s net recovery was $25,500. This was a fantastic result by Mullen & Mullen Law Firm given his prior complaints of back and neck pain.