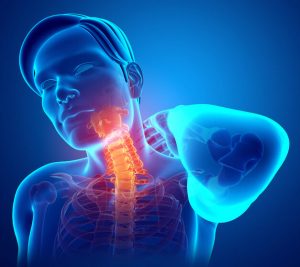 Our client was driving northbound on Webb Chapel Road in Dallas, TX. He brought his truck to a stop to allow a pedestrian to cross the road. A distracted motorist failed to slow down and rear-ended him. Our client sought treatment the next day for neck pain.

Comments from Attorney Joseph Morrison: Our client complained of numbness and tingling in his left arm the day after the Dallas car crash. His doctor diagnosed cervical radiculopathy and referred him to physical therapy.

Shooting pain from your neck into your arms, hands, and/or fingers is a troubling sign that could indicate the presence of a herniated disc. It is very important to immediately let your physician know if you experience numbness, tingling, or shooting pain following a motor vehicle accident.

An MRI of the client’s cervical spine revealed a small herniated disc. He eventually required a trigger point injection and epidural steroid injections in order to obtain some degree of relief from his pain. The client was also diagnosed with a concussion by his treating neurologist. Thankfully, however, his dizziness eventually resolved.

It’s always rewarding when you help a client get the policy limits without the increased expenses and attorney fees associated with litigation. By not immediately recommending litigation – and the increased expenses that come with it – I was able to save our client thousands of dollars. At Mullen & Mullen Law Firm we go the extra mile and always put our client’s interests above our own.

The settlement for this personal injury claim involving a herniated disc as a result of a motor vehicle collision in Dallas, TX was $112,500. Attorney fees were $31,000. Case expenses were $251.70. After paying medical providers, the client’s net recovery was $44,957.42.