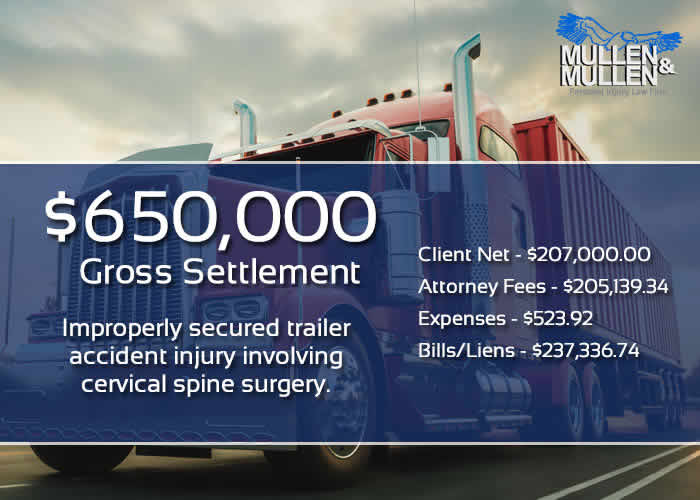 $650,000 Settlement for Spine Injury in Dallas Truck AccidentOur client was driving south in the left lane on I35. A motorist in the right lane was pulling a trailer in the course and scope of his employment. He had failed to properly secure the trailer and was also speeding. As a result the trailer swayed into our client’s lane and collided with her car.

Comments from Attorney Shane Mullen: Our client was already on disability for low back injuries that required her to undergo lumbar spine surgery. The wreck at issue aggravated her low back condition and injured her neck. She first complained of neck pain at the emergency room. Our Dallas personal injury attorneys assisted her in obtaining the services of a well-respected doctor and was able to convince the physician to delay billing until the conclusion of her case.

Remember: Documentation is absolutely critical in personal injury claims. It is imperative that you work with medical providers that take detailed notes and discuss mechanism of injury and causation in their records.

In this case, the client’s initial physical examination was positive for cervical orthopedic tests that indicated possible disc herniation in multiple levels. In addition, the doctor noted her neck felt swollen and painful to touch.

An MRI of her cervical spine was quickly ordered due to the positive findings during physical examination as well as her complaints of numbness and paresthesia (tingling or “pins and needles”) in her arms. The MRI revealed a herniated disc producing mild cord impingement. Electrodiagnostic testing followed and demonstrated evidence of right C6 radiculopathy.

Our client underwent a cervical ESI to attempt to obtain some degree of pain relief. Unfortunately, her pain only slightly decreased following the procedure. She attempted several other procedures including facet injections and a nerve block but the relief provided was only temporary.

All of the procedures were performed at a surgery center or ambulatory surgical center and the facilities, anesthesiologists, and physicians all agreed to delay billing the client until the conclusion of her injury case. Spine surgery is obviously always the last resort and I was proud we were able to help the client exhaust all other options before it was considered.

Our client eventually met with a neurosurgeon who confirmed that surgery would be necessary for her to obtain relief. We were able to get the neurosurgeon and hospital that performed the surgery to also delay billing until the conclusion of the case so our client could focus solely on her recovery – and not a mountain of collection notices.

One of the things I am most proud of is the quality of the medical professionals and facilities we work with. At Mullen & Mullen Law Firm we have been assisting injured victims since 1982. We have a very good reputation in the community and our relationships allowed us to truly help this client in her time of need.

We sent a 14-page settlement proposal to the insurance carrier for the at-fault company and its employee. It integrated the client’s medical records in a chronological fashion and highlighted the strengths of her car accident injury claim.

Negotiations were heated at times and unfolded over many weeks, but ultimately we were able to obtain a pre-suit settlement that allowed her to avoid costly and time-consuming litigation. This was a fantastic result for a wonderful client.

The settlement for this personal injury claim involving a herniated disc that required surgery as a result of a commercial vehicle accident in Sanger, TX was $650,000. Attorney fees were $205,139.34. Case expenses were $523.92. After paying medical providers, the client’s net recovery was $207,000.