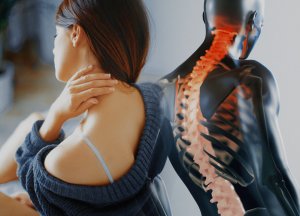 Our client was driving southbound on the Dallas North Tollway. Traffic was heavy and she had to bring her vehicle to a stop. She had been stationary roughly 2 or 3 seconds when she was rear-ended by a distracted motorist who failed to slow down.

Comments from Attorney Joseph Morrison: Our client had immediate complaints of neck pain, back pain, and head pain. It became apparent that physical therapy alone would not be adequate to control her discomfort when the results of a cervical MRI revealed herniated discs. In addition, a neurologist diagnosed a concussion as a result of the auto accident.

An occipital nerve block is an injection that is performed around the occipital nerves located at the base of the skull and is used to suppress headaches. Radiofrequency thermocoagulation is also known as radiofrequency ablation and involves using heat to destroy a specific nerve to provide pain relief. The procedures helped our client to obtain some significant relief but she will likely require additional medical treatment in the future.

Her underinsured motorist carrier was one we typically have to litigate against but I wanted to make every effort to give her the opportunity to avoid costly and time-consuming litigation. I was really happy that we obtained a full policy limits offer pre-suit.

It’s very rewarding when we at Mullen & Mullen Law Firm are able to assist someone in making the best out of a bad situation. Getting both insurance companies to tender policy limits without having to file a lawsuit saved the client many thousands of dollars.

Our attorneys take serious pride in securing all available settlement monies for clients while they have a lower attorney fee. We do not immediately recommend litigation (where attorney fees and case expenses drastically increase) like some injury law firms. We believe in doing what is best for our clients.