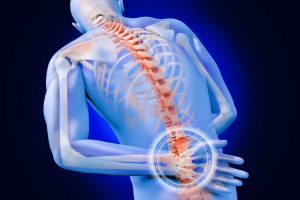 Our client, a former Marine, was injured in Denton, TX when he was hit by a driver who disregarded a red light and entered the intersection of S Loop 288 and Spencer Rd. Property damage to the vehicles involved was substantial and our client took himself to the hospital. When he hired us we immediately filed a claim with GEICO – the at-fault driver’s insurance company.

Our client’s primary complaints were neck pain and low back pain radiating to his left hip. Prior to the motor vehicle collision he had a history of low back pain due to a herniated disc. He required physical therapy, an epidural steroid injection, and ligament injections in order to obtain relief for the increased pain in his low back. An MRI revealed a 5-6 mm disc protrusion.

Remember: Just because you have a “pre-existing condition” does not mean you are barred from receiving compensation following a car accident. In Texas you can recover damages if you can establish the collision caused an injury or an aggravation of an existing injury. Texas law recognizes the “Eggshell Plaintiff” doctrine – that some people are predisposed to injury due to an underlying condition.

Comments from Attorney Joseph Morrison: When we agreed to represent this client we knew he had a low back injury before he was even involved in the wreck. Insurance adjusters love to try and suggest a pre-existing condition means they shouldn’t have to pay anything. I was confident, however, that we could still win the case.

After all, isn’t it common sense that someone who already had a bad back would be pre-disposed to experience additional pain and discomfort if they were involved in a major car wreck? I’m happy we were able to help this client get the injections he needed to get back to his pre-accident condition.

Our Dallas personal injury law firm submitted a Stowers demand to GEICO requesting the full policy limits of $30,000. GEICO, however, only offered $11,000. We didn’t panic. We requested the client’s prior medical records, copies of a prior MRI film, and the MRI film from the imaging he had done following the auto accident.

His prior records demonstrated that he had new symptomology following the wreck. The MRI films/reports – when compared – showed that his lumbar disc herniation was made worse in the collision. We continued to demand the policy limits, threatened litigation, and GEICO eventually caved and paid the full policy limits – as they should have done from the beginning.

Some attorneys might have immediately put the case into litigation when the $11,000 offer was received. Attorney fees generally increase if a lawsuit is filed. However, we always try to resolve cases as early as possible for clients because that ultimately saves them months of stress and increased fees.

By staying the course and continuing to fight we were able to eventually get a full policy limits settlement without filing a lawsuit – saving the client thousands of dollars in the process.

The $30,000 settlement for this personal injury claim involving a herniated disc as a result of an auto accident in Denton, TX was the policy limit. Attorney fees were $7,245.66. Case expenses were $319.67. After paying medical providers, the client’s net recovery was $7,245.67. This is an outstanding result given the insurance company’s initial offer of $11,000.