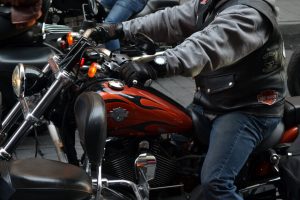 Our client was driving his Harley-Davidson motorcycle traveling eastbound on 200 E Avenue D in Garland, TX in the inside lane. An inattentive motorist was also traveling eastbound and attempted to make a left turn onto Rayburn from the middle lane. The at-fault driver struck our client’s motorcycle knocking him to the pavement.

Remember: According to Texas Department of Transportation statistics, 459 motorcycle drivers and/or passengers were killed in Texas in 2015. The statistics clearly demonstrate that not wearing a helmet increases the risk of death in a motorcycle accident.

Comment from Attorney Joseph Morrison: This client retained our Dallas personal injury law firm towards the conclusion of his medical treatment. While the majority of our clients hire us in the days or weeks following an auto accident we often agree to represent individuals even if they have already finished treatment for their injuries.

We were still able to help this particular client fully develop his case to maximize his chance at a pre-suit settlement. In addition, a large percentage of his injury attorney fees were offset by our ability to get his health insurance company to reduce its lien amount.

Our client suffered impingement syndrome in his shoulder and a sprained rotator cuff as a result of the motorcycle wreck. His physician recommended a shoulder arthroscopy (scope) when physical therapy failed to eliminate his complaints of pain. In addition, the client, who had chronic back pain before the accident, experienced increased pain and discomfort in his lumbar spine after the accident.

Many people have chronic conditions that exist prior to a wreck. These chronic conditions can be exacerbated by a traumatic event. In fact, physicians often refer to an “acute on chronic” injury. I argued to the adjuster that even though the client did not have a definitive shoulder tear the surgery he underwent was both reasonable and necessary.

I further argued that the at-fault motorist was responsible for the client’s increased back pain and discomfort. After extensive negotiations I was able to help the client secure a settlement that was substantially higher than his incurred medical bills.

The settlement for this personal injury claim involving a rotator cuff sprain injury as a result of a motorcycle accident in Garland, TX was $130,000. Attorney fees were $38,500. Case expenses were $351.81. After paying medical providers, the client’s net recovery was $64,276.43. This is an outstanding settlement for a shoulder injury not involving a tear.