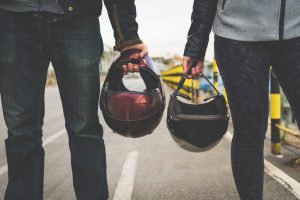 Our client was a passenger on a motorcycle traveling northbound on Preston Rd in Frisco, TX near Main St. The motorcycle operator failed to yield the right of way turning left into a parking lot and was struck by a sedan. The motorcycle driver and our passenger were both transported to the hospital via ambulance.

Physical examination at the ER revealed multiple contusions and abrasions. Imaging of her right clavicle (collarbone) demonstrated a minimally displaced longitudinal distal fracture. As a result of the fracture she experienced post-traumatic arthropathy.

Comments from Attorney Joseph Morrison: Early on in the case our personal injury law firm identified all possible sources of recovery for the client. We established a liability claim with the operator of the motorcycle as well as an underinsured motorist claim with our client’s own insurance carrier. We assisted the client in locating a medical provider that delayed billing her for the physical therapy services she required until the conclusion of her motorcycle collision case.

Remember: Our client was wearing a helmet at the time of the collision. Had she not been wearing a helmet she could still pursue her claims but it is likely that she would have been found comparatively negligent for her injuries.

The client’s clavicle eventually healed but she did develop some osteoarthritis in her shoulder. She received injections in her AC joint that provided some additional relief from her discomfort.

The settlement for this personal injury claim involving a fractured clavicle as a result of a motorcycle accident in Frisco, TX was $132,500. Attorney fees were $37,100. Case expenses were $228.47. After paying medical providers, the client’s net recovery was $58,369.25. This was a fantastic result by attorney at all available policy limits.