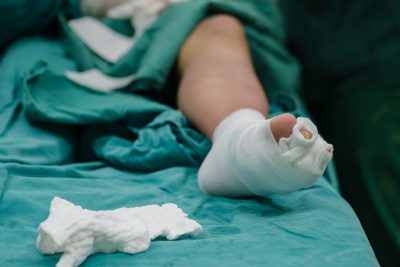 $300,000.00 Broken Ankle Settlement by Lawyer in Pedestrian Accident in Forney, TX for Client Hit by Distracted Driver Who Required Surgery.

A Mullen & Mullen client was at a convenience store in Forney, walking towards the entrance, when she was struck by a distracted driver and knocked to the ground and sustained serious injuries to her left leg. An ambulance was called to the scene to transport her to the emergency room.

Comments from Attorney Joseph Morrison: Medical imaging was immediately ordered due to the obvious deformity to her left ankle and the results demonstrated a medial dislocation of the talus and a lateral dislocation of the remaining hind-foot. She also sustained a fracture fragment posterior to the ankle mortise.

Remember: Parking lots can be dangerous places if you are a pedestrian. Even if you are struck at a low speed, the possibility of sustaining significant injuries is obviously enhanced. Stay vigilant and keep an eye out for distracted drivers.

Our client required physical therapy and rehabilitation following the surgical procedure and was unable to return to work for roughly four months. We submitted a settlement demand package to the at-fault motorist’s liability insurance carrier.

The incurred medical bills were roughly $50,000. When Attorney Shane Mullen and I evaluate cases we don’t rely on some arbitrary formula that is tied to the client’s medical bills. We believe personal injury claims are about people – not medical bills.

She was simply at the wrong place at the wrong time and sustained a serious injury that deeply impacted her life. Our client was entitled to fair compensation. After extensive and deliberate negotiations we were able to obtain a $300,000.00 settlement for her.

Mullen & Mullen Law Firm is very proud of this great result for a very deserving client.

Consultations Are Free. Talk To A Lawyer Today.