How Does Texas Law Work When You Slip and Fall At Work? 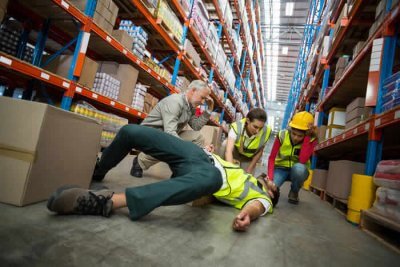 You don’t want to have a slip and fall accident at your job. Texas law gets complicated when you do, and it isn’t on your side. Learn more from Mullen & Mullen.

About Slip & Fall Accidents at Work in Texas

When you slip and fall at your work in Texas, law gets complicated. If you thought law was already confusing, it gets even more so.

When you fall on the job, it’s not automatically a workers’ comp case.

When Does a Slip and Fall at Work Become a Personal Injury Claim?

You may have a personal injury claim in Texas, even if you were hurt on the job, if:

Workers’ Comp Insurance Doesn’t Like to Pay For Your Injuries

That’s the way Workers’ Comp Insurance works in Texas and any other state in the nation.

A Quick Story to Illustrate the Point

Andrew Ellis was driving a semi-truck and began unloading a shipment with a two-wheel dolly. The shipment, a load of plastic PVC pipes, was being pulled by Andrew with full force, when he slipped and fell backward. During the process, he felt his left knee pop, causing his knee joint to go out of place. Of course, it was intensely painful.

The Workers’ Comp Insurance Company, Providence, denied Ellis’ claim because he verbally said his knee “gave out.” “Giving out” does not imply a work-related injury was their reasoning. And, you could say, it was just an injury waiting to happen.

Andrew was fired because he didn’t show up for work due to his injury. When he called HR, they told him he had quit. He eventually became homeless. 33 months later, law prevailed, and Ellis won $268,000 for his claim.

His attorney told him his case is nothing special.

To top it off, the policy written by Providence was intentionally designed to not pay. It required Andrew to notify his employer of his injury within 24 hours (versus 30 days normally required by Texas’ Workers Comp). Plus, the plan also required a supervisor to go with Andrew to all his doctor appointments!

You can read the full story at the Houston Press.

Texas Workers’ Comp Law Isn’t On Your Side

If you slip and fall at work, there’s no guarantee you’ll experience trouble getting the benefits you should. But, you do have a high chance. Make sure you act fast if you’re injured on the job. Consultations with personal injury lawyers are free, so you risk nothing by at least checking your facts with a legal expert.

150 Workers Die Every Day in America from Hazardous Working Conditions