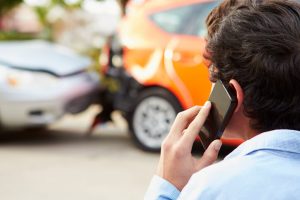 $81,000 settlement for herniated disc injury in Arlington, TX car wreck by attorney at Mullen & Mullen for client who was rear-ended.

Our client was traveling northbound in the outside lane of SH 360 in Arlington, Texas. A distracted driver rear-ended our client who was forced to seek emergency medical treatment due to the nature of the injuries he sustained in the car wreck.

Comments from Attorney Joseph Morrison: Mullen & Mullen was retained when the client’s significant pain and discomfort continued. He was really concerned that the low back pain he was experiencing was shooting down into his left leg. Numbness, tingling, and shooting pain can often result from a herniated disc.

We assisted our client in locating a clinic that agreed to delay billing him until the conclusion of his injury claim so he could focus on getting better and not worry about sudden unexpected medical expenses. Due to the continuing shooting pain down into his left leg he was instructed to get an MRI of his lumbar spine. The MRI results clearly indicated that he sustained a herniated disc at L4-5.

Remember: Insurance companies almost always try to suggest a herniated disc was caused by something other than the car accident. If the MRI results show the presence of degenerative disc disease they will try to argue the injury was pre-existing.

Often times they will request five (5) years prior medical records to try and determine if you had similar symptoms or complaints before the accident. However, you are still entitled to damages even if the accident simply aggravated a pre-existing condition.

It was readily apparent the client would need additional treatment beyond physical therapy to recover from his injuries. He was referred by the clinic to a well-respected pain management doctor who also agreed to delay billing until the conclusion of the case.

The physician performed lumbar epidural steroid injections on two different dates. The injections provided significant pain relief to the client and resolved the pain that had been shooting into his leg.

I was really pleased that our client had such good results from the lumbar epidural steroid injections. The injections helped calm the inflammation in his spine so that true healing could take place.

Our personal injury law firm sent a settlement proposal to the at-fault motorist’s liability insurance carrier as well as our client’s underinsured motorist carrier. We were able to help our client obtain a fantastic pre-suit settlement that allowed him to avoid the time, increased expenses, and increased attorney fees associated with litigation.