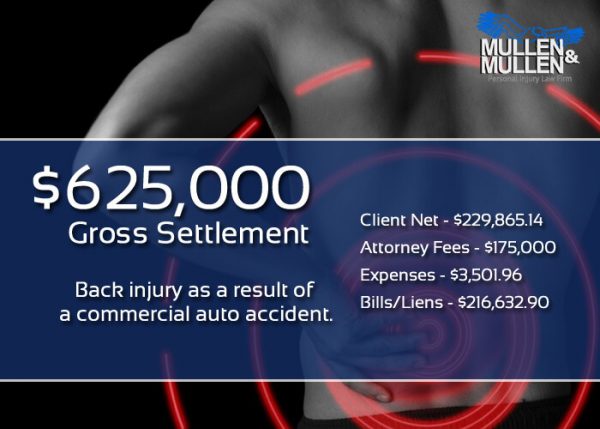 $625,000 Settlement for Back Injury in Commercial Auto Accident

$625,000 back injury settlement by attorney at Mullen & Mullen Law Firm for client hurt in a commercial auto accident in Dallas, TX.

Our client was traveling northbound on IH-35 in Dallas, TX near Crown Rd. The at-fault driver, operating a commercial vehicle in the course and scope of his employment, attempted to move into the same lane and hit our client’s car.

Comments from Attorney Joseph Morrison: Our client was forced to go to the hospital the day after the car crash with initial complaints of neck and back pain. Low back tenderness was noted on physical examination at the ER. When his pain persisted he began therapy and rehabilitation efforts under the direction of a UT Southwestern physician who also documented positive findings on physical examination.

The client continued to experience numbness and tingling in his right leg so his treating physician ordered a lumbar MRI. The MRI revealed a lumbar disc protrusion and annular tear. The UT Southwestern physician referred him to a specialist given the objective evidence of injury.

The pain management doctor our client was referred to concluded lumbar median branch facet nerve blocks and trigger point injections were warranted. His left low back improved following the procedures but his right low back pain and right lower extremity symptoms persisted.

The pain management doctor performed right L4-5 and L5-S1 transforaminal epidural steroid injections. The second set of procedures also failed to provide our client with adequate relief and he was referred to a neurosurgeon for a consultation. The neurosurgeon determined lumbar spine surgery was necessary. Specifically, our client required a L4-L5 minimally invasive interbody fusion and decompression with laminectomy.

The neurosurgeon ordered a new MRI following the consultation so that he could compare the results with the prior study. The new scan revealed that the disc herniation had increased in size and the gelatinous part of the disc had squeezed out. Our client now had a disc extrusion – the nucleus material of his disc had leaked into his spinal column. It was obvious to the neurosurgeon at that point that our client’s spine was not stable.

Our client – like millions of other Americans – could not afford health insurance. Mullen & Mullen Law Firm was able to convince the neurosurgeon, hospital, and anesthesiology group to proceed with the surgery and delay billing for their services until the conclusion of our client’s case.

We had the surgery professionally filmed and presented a copy of the footage to the insurance company. Many insurance adjusters have become “numb” to operative reports so we wanted to make sure the adjuster on this client’s case truly knew what a significant procedure this was. The surgical video allowed us to demonstrate that in a very powerful manner.

Our client’s condition slowly improved following his surgery. The radicular symptoms in his leg resolved and his pain almost completely resolved as well. He did, however, have some residual complaints as would be expected following a major surgery.

We submitted a very detailed settlement proposal to the insurance company with the surgical footage and eventually agreed to a pre-suit mediation in an effort to try and resolve the injury case without the necessity of costly and time-consuming litigation. Attorney Regis L. Mullen and Attorney Shane V. Mullen also attended the all-day mediation. Having three lawyers present let the insurance carrier know how serious we were about the auto accident injury claim.

The mediation was tedious and for most of the day it looked like settlement was not going to be an option. Shane was the driving force behind eventually getting the insurance company to significantly increase the offer. He visited privately with the insurance adjuster and had a frank and honest discussion with him that really helped bridge the gap. Eventually both sides agreed to the mediator’s proposal and the case settled. The client saved over $33,333 due to our firm’s 29% – as opposed to 33.3% – contingency fee contract.

The settlement for this personal injury claim involving a back injury as a result of commercial auto accident in Dallas, TX was $625,000. Attorney fees were $175,000. Case expenses were $3,501.96. After paying medical providers and lien-holders, the client’s net recovery was $229,865.14.