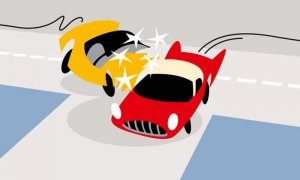 $107,025 settlement for elbow injury in Keller, TX car accident by attorney for client who was left with a small scar.

Our client sustained a permanent scar as a result of a 3 inch wound on her elbow, following a motor vehicle collision. The at-fault driver was traveling southbound at the intersection of Cat Mountain Trail and North Tarrant Parkway in Keller, TX. Our client was traveling westbound in the 1000 block of North Tarrant Parkway, when the negligent driver failed to yield the right of way and hit her automobile causing it to roll several times.

She received several injuries in the accident which required physical therapy, including injuries to her neck, back, left knee, right ankle, and left elbow. Our Dallas personal injury law firm was able to assist her in obtaining medical services from a therapy clinic, neurologist, medical doctor, medical imaging facility, and psychologist.

Comments from Attorney Joseph Morrison: I realized early that mental anguish and disfigurement were the non-economic damages to focus on to maximize her settlement. The psychologist documented post-traumatic stress and anxiety while driving. The neurologist was able to document a subtle injury to her left ulnar nerve. Her scar improved a great deal in the months following the Keller car wreck, but certainly remained noticeable. We had the client take periodic photographs of it as her case progressed, and submitted one just a few days before her personal injury claims were resolved.

Her total recoverable medical bills were less than $30,000. We submitted a liability demand to the at-fault driver’s carrier, USAA, and a demand for benefits under her underinsured motorist policy with Progressive. We were eventually able to secure a gross recovery of $107,025.

Insurance adjusters always try to downplay damages for disfigurement. In this case I argued that our client’s job required her to interact with the general public on a daily basis, and that the location of the scar would impact the attire she could wear at work. I was eventually able to convince both adjusters that her disfigurement claim had significant value, despite the relatively modest medical bills.

The settlement for this claim involving a small permanent elbow scar as a result of a car wreck in Keller, TX was $107,025. Attorney fees were $29,967. Case expenses were $578.59. After paying medical providers, the client’s net recovery was $53,006.82. This is an outstanding result for a small disfigurement claim.