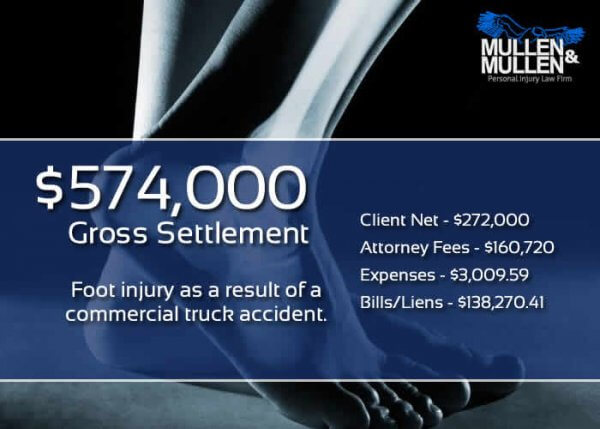 $574,000 settlement by attorney for foot injury in Dallas, TX commercial truck accident for client with no health insurance.

Our client was walking through the parking lot at 13100 Coit Road in Dallas, TX when a commercial box truck was exiting the parking lot and struck his left leg/foot area. The driver of the truck left the scene without providing identification or insurance information but witnesses were able to identify the name of the company on the truck.

Comments from Attorney Shane Mullen: We locked down liability right out of the gate. Our firm has an in-house private investigator, Mike Foster, who we utilize to develop and preserve evidence on cases. Mike was able to get a strong affidavit from one of the witnesses who was referenced in the police report associated with the pedestrian accident.

We learned very early in the case that our client had sustained a major injury. He underwent an MRI of his left foot and was diagnosed with multiple calcaneal fractures. An orthopedic surgeon confirmed the client, who did not have health insurance, needed a major surgery… and fast. Mullen & Mullen Law Firm has been in Dallas since 1982 and we have long-standing relationships with surgeons and surgical centers/hospitals throughout DFW. We were able to get him a major surgery, requiring an in-patient stay, at no up-front cost to him.

I am exceedingly proud that we were able to get the surgeon, surgical center, and anesthesiologist to all agree to delay billing until the conclusion of this personal injury claim.

Our client underwent reduction and fixation of his left calcaneal fracture. Following the surgery he did physical therapy, also with delayed billing, until the conclusion of his claim. Due to the nature of his injury, and despite compliance with his physical therapy requirements, it was obvious he was going to have some degree of physical impairment the remainder of his life.

Comments from Attorney Joseph Morrison: Our injury law firm is very collaborative. The attorneys constantly brain storm together and reach out to one another for shared knowledge. Previously I litigated a case involving a calcaneal fracture where my client had done very well and Shane asked for my assistance in preparing the settlement demand for this Dallas commercial truck accident injury claim.

We submitted a settlement demand package to the insurance carrier for the at-fault driver’s company. It included a complete set of our client’s medical bills and records and incorporated: multiple document excerpts, a 3D medical timeline, and a report by a certified legal nurse consultant accompanied by supporting medical literature.

You want to make sure you work with a personal injury law firm who goes above and beyond. Our settlement demand on this case would be Exhibit 1 to how our firm maximizes case value. We didn’t send a form letter asking for money. We sent our client’s story in a narrative that weaved in his medical records and liability factors.

We had a 3D timeline in movie and slide presentation form so the insurance adjuster could see a chronology of his treatment. The biggest factor, however, is that our firm spent the money necessary to give the case an edge. A legal nurse consultant reviewed our client’s medical records, wrote a report, and accompanied it with medical articles and research.

Her research helped us to spot subtle factors that influenced the settlement we were able to obtain. For example, the fact that his fracture was comminuted raised the surgery failure rate, and the fact that he suffered the injury as a result of a vehicle collision meant he had a worse long-term outcome than someone who suffers the same injury in a fall.

Knowing those key details, and having the medical literature to back it up, demonstrated to the insurance company that we knew our case and were prepared to prove it. Mullen & Mullen Law Firm spends the money necessary to give our clients the best chance to settle as early in the process as possible.