What’s the Connection Between Vehicle Damage and Injury? 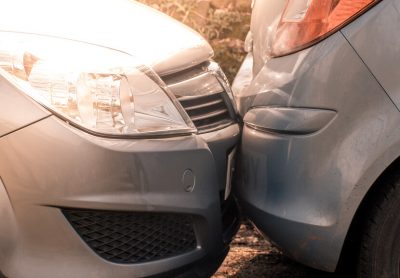 Should you be embarrassed if you come away from a tame auto accident with severe injuries? Probably not. And now science supports this.

A psychology professor once showed his students a film of two cars getting in an accident.

A few days later, he divided the students in two groups and asked them each one of these questions:

Students asked the second question recalled broken glass in the automobile wreck at a 30% higher rate than those asked the first.

One problem: no glass shattered in the video.

The case demonstrates the way your human mind works: you can draw conclusions that didn’t actually happen when scenarios get presented to you in different ways.

So, when you see two cars completely trashed, you immediately think of someone unconscious going to the ER. And maybe you wonder who died. You might turn on the TV tonight to find out.

You see a mashed up bumper – and you naturally think everyone’s okay. Maybe a bump or bruise or two. But that’s it.

And if someone comes away from that with whiplash…they must be faking it to milk money out of the other guy.

But Do Things Work the Way They Seem?

Now, transfer this concept over to personal injury claims and recovering money for your injuries.

When it comes to claims, professionals in the field often think “No crash. No cash.”

That might be the reality of how it practically works.

But that may not be the way it should work.

Even though this was 15 years ago, he still had considerable evidence which destroys the link between crash and injury severity:

What’s This Mean For You?

Defending lawyers, if you have experienced an injury at a low speed, will try to say you’re faking it for the money. They’ll also use the severity of the crash against you.

Because, even though you now know these facts, they’re not necessarily widely accepted as the standard in court.

If you do find yourself in a situation where your crash looks mild, but you walk away with injuries, let go of your shame, fear, and guilt.

Instead, talk with an injury lawyer who understands the truth: that crash severity and your injuries don’t necessarily have a connection.

Your car crash has its own unique circumstances. And you need a lawyer who understands that and hires experts who know how to prove your claim.

Just How Safe is Dallas-Fort Worth to Drive in Anyway?

Why Would a Personal Injury Lawyer NOT Take Your Case?