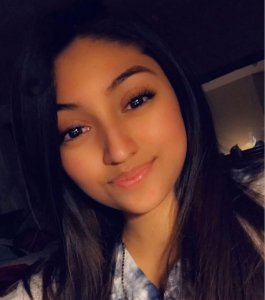 We are pleased to announce our 2020 Regis L. Mullen Accident Injury Scholarship winner: Emily Gutierrez. Here is her compelling story and winning essay.

On February 4th, 2019 I decided to take my mom to the mall, I was the first time I had a day off in a while and said why not. On our way home from the mall, we decided to bring back some food for my brother and sisters. As we made a left turn, an SUV hit us head-on. My car spun out of control and landed on the opposite side of the street. I turned and looked at my mom as she frantically reached for her seatbelt to get out of the car. I smelled smoke coming from the front of the car and reached for my seatbelt but couldn’t move my right arm. I heard the car’s OnStar ask If we were okay and needed an ambulance so I said “yes, we need an ambulance”, I didn’t feel any pain but could hear my mom crying and breathing heavily.

After my mom finally got her seatbelt off, she reached for the passenger door and couldn’t get it open. I finally unbuckled myself and reached for my door but couldn’t open it either. I held my steering wheel with my left hand for support and began to kick the door open. As I was kicking the door, a man from the outside pulled it open and said an ambulance was on its way. We crawled out and sat in his car while waiting for help to arrive.

I looked up from the back of a stranger’s car and saw my car in a million pieces. My mom was on the phone with my dad, I reached up to wipe a tear and my face felt wet and sore. After a few minutes and EMT opened the door and asked if anything besides my head hurt. While they put me on a stretcher, I could hear my mom crying as she was being helped by another EMT. After I was on the ambulance, they began to check all spots with blood and for any broken bones. Before they began to take my vitals, I looked over at one of them and said “hey, can you get me out of this jacket. My arm is broken, and I can feel it cutting off my circulation”. He smirked and asked how I knew my arm was broken and I simply replied that I knew. They couldn’t take off my jacket, so they cut it off and I began to feel dizzy and sleepy, with some chest pain. When we arrived at the hospital all I could remember was the nurse inserting an IV on my left arm and loading up the narcotics. After a few hours, I remember being told I had broken my arm, a few ribs, cracked my head open and everything else was just bruising and scratches. After a few days, I was finally released from the hospital and was able to go back home.

I was home for a week (with a broken arm) before I could go in for surgery. My experience was a little different. Strangely after only a few days after surgery, I began physical therapy. Since the procedure, I haven’t experienced any major pain or complications, the worst of it all has been losing feeling in part of my arm, pain, swelling, and since I do have metal plates in my arm, I have pain during the cold weather. I began therapy a week after surgery and it continued for another four months.

During this time, I missed about a month of college classes and exams. I wasn’t able to write, and typing was very frustrating to get used to with only my non-dominant hand. Coming back after Spring Break, I was expected to finish all assignments and exams I had missed in two weeks, while still having my splint on. I had to drop a few classes and take them over the summer to stay on track for graduation.

I was working at Delnor Hospital, in Geneva when it all happened. A few days after the accident, I called my manager and explained the situation letting her know, I would be unable to work for a few months. I was not given leave, instead, I was told they were going to “have to let me go”. I lost my job and was unable to work for about six months after surgery. I had things to pay and had to take money from my savings for school to be able to get through those few months. My dad is the only other one that works in our family of Six, so this was very stressful on him. I wasn’t expecting to get paid while I was recovering, I simply wanted them to provide job protection to allow me to recover completely and return to work.

I couldn’t leave my house for a few months until after my splint was off, so for that time I didn’t have to deal with the stress of having to get in a car. Ever Since the accident, I haven’t been able to drive. I don’t have a car anymore, and I think it is why I can avoid driving altogether. The first time in a car after the accident was interesting, I had a panic attack on my way to Target. After spending more and more time inside by myself and not being able to do much I began to sleep all day and not eat much. I was depressed for a while.

After everything that happened, I think it allowed me to realize how everything can happen so fast and you can’t change it. I have started therapy and medication to deal with anxiety, I have been working on overcoming the fear of driving in big streets. After all, I think It just makes life more challenging, but I’ve learned to appreciate more.